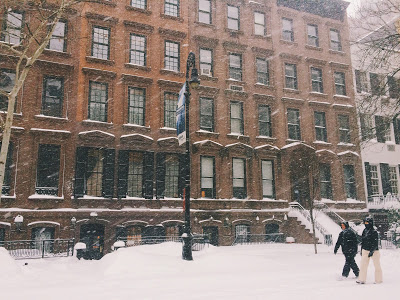 It’s getting chillier. What the trees have been dropping in leaves, we’ve been picking up in extra layers. We’re seeing more and more dogs in sweaters. Our chronic hankering for cocoa with marshmallows is becoming justifiable. Which can only mean one thing… winter is right around the corner! But don’t let Jack Frost keep you cooped up inside! Here at 1871 House, we’ve came up with some pretty cool things to get up to while you’re staying with us!

Given that 1871 House is actually located on the Upper East Side, we’d be remiss if we didn’t leave a little space for UES’s world famous Museum Mile!
Museum of the City of New York
Come look at how New York City became what it is today. With exhibitions that take you into how the city was built, it’s art and underground culture, the history and role of activism in an in-your-face kind of city, and a photo essay on the South Bronx in a time of crisis in the late 70’s.

El Museo del Barrio
Immerse yourself in the artistic landscape of of Latino, Caribbean and Latin American Cultures. With films, performances, and visual art, El Museo del Barrio offers an exquisite opportunity to acknowledge the experiences of other cultures in a rich and meaningful manner.

Cooper Hewitt, Smithsonian Design Museum
The only museum in the world devoted exclusively to historic and contemporary design.

Solomon R. Guggenheim Museum
Renowned internationally, the Guggenheim is one of the most significant hubs of modern and contemporary art, as well as a cultural icon of the 20th century.

Only a hop, skip, and a jump away from 1871 House, Central Park is one of New York City’s largest and perhaps most famous attractions. Of course, one could spend their time visiting walking the trails and it wouldn’t be a wasted trip to NYC, but we thought we’d put out a couple more things you can get up to in Central Park. Pro tip: bring your camera.
Horse Carriage Tours
Giddy up with Central Parks most popular tour! A relic of a time long past, the spirit of horse drawn carriages is kept alive in Central Park. Pro tip: if you tip your driver well, you may be allowed to feed the horse carrots!
Bike Rentals
Breeze through the park comfortably at your own pace! Kids bikes also available as well as tandem bikes for that special someone who is clearly not pedaling as hard as you are just to be difficult!
Bike Tours
Central Park has so much to see, so why not leave it to a professional? Whiz about getting the inside scoop on the amazing history and architecture Central Park has to offer, and of course see where they filmed ‘Ghost Busters’, ‘Sex in the City’, ‘Home Alone 2’, ‘Friends’ and so much more! Group and Private tours available!
Walking Tours
Explore the nooks and crannies of Central Park with one of the many Walking Tours. Break a sweat with one of Central Park’s Sunrise Yoga Tours! Explore the park’s significance to gay and lesbian history on the Gay History Tour! Feel like a true New Yorker getting to peek into some of the lesser known gems of Central Park on the Hidden Secrets Tour! Now until January 5th, get taken around to see the sights that only a New York City holiday season can provide on the Holiday Sights Tour!
Pedicab Tours
Okay, so you don’t like horses, your feet are sore, and you can’t ride a bike. No problem! Hop into a Pedicab and get taken up and down Central Park!

Winter Village at Bryant Park
Explore kiosks featuring artisanal goods from craftsmen around the world.
Union Square Holiday Market
Oh no! You forgot to buy an antique map of Loudoun County, Virginia, and a dishwasher-safe pint-glass made from a used craft beer bottle for your Girlfriend! Worry no more! The Holiday Market in Union Square is where you need to go! A MUST for unique, vintage, handcrafted gifts from local artists and craftsmen. Browse the winding isles made up of over 200 local artists and vendors.
Columbus Circle Holiday Market
Credited internationally as one of most elegant and fashionable places for winter shopping. Sample a jar of artisanal jam, hand-made jewelry made from trinkets found around the world. The Columbus Circle Holiday Market celebrates the class and ingenuity of New Yorkers.

2016 Rockerfeller Center Tree Lighting
Every year, thousands of people flock to Rockerfeller Center to see the giant tree light up. Come bear witness to the magical moment where over 30,000 lights bring the 94 ft (tallest tree since 1999) tall tree to life! The tree will be up and lit until January 7th.

The Westminster Kennel Club Dog Show has been a part of New York City for well over 100 years and does well to reflect the growth and success of the city. Check out the prestigious WKC Dog Show February 13th and 14th. Bad dogs not allowed.

Central Park Midnight Run
Prove to your friends and family that you’re going to follow through with your resolution to get in shape this year by running 4 miles in firework lit Central Park. You can register on the day and cash prizes for 1st, 2nd and 3rd place and record breakers!
New Years Eve in Times Square
For over 100 years, Times Square has been where New York ushers in the New Year. With live music, parties and of course, the famous ball drop, you can be right in the center of the world for the start of 2017! Pro tip: get there early, it’ll for sure be crowded – hurry – we have have just one opening available for New Year’s Eve!
Polar Bear Club
So you missed the Central Park Midnight Run and still have a little bit of the holiday weight gain to burn off. Might we suggest a few laps at Coney Island on New Years Day? Word on the street: frigid water is an excellent hangover cure?
Usher in the Year of the Rooster!
Are you susceptible to the Holiday Blues? Hey! Don’t even worry! The party doesn’t stop on January 1st! There’s still the Chinese New Year! And every year, volunteer-based organization ‘Better Chinatown’ works to put on an amazing festival and Lunar Parade to make the Chinese New Year one of the most successful and popular attractions in New York City.
Saturday, January 28, 2017:

The little rascals have been simply incorrigible locked up in the hotel room. But when you take them out, they either end up with a snowball induced welt on their head, or you’ve had to explain one time too many that the yellow snow is not in fact lemonade. For a change of pace, try one of our suggestions for fun and engaging things to do with the kiddos.
MoMa Family Programs
An institution dedicated to immersing people in the finest collection of modern and contemporary artwork worldwide, the Museum of Modern Art has a well-earned place on itineraries for Tourists and New Yorkers alike. MoMa’s Family Gallery Talks help and encourage children ages 4 to 14 to look a closely and engage with modern masterpieces and cutting edge contemporary art (free with price of admission, no pre-registration required). Channel what you and your children saw at the gallery into your own works of art with a Family Arts Workshop (free with price of admission, 10 day pre-registration required).
American Museum of Natural History, Discovery Room
Besides getting to see one of the world’s largest dinosaurs, the American Museum of Natural History has a lot to offer. For families with children aged 5-12 we’d suggest the Discovery Room! Where children and their parents can explore artifacts, take on puzzles, and have a hands on experience of the science that goes into the Natural History Museum.
Milk & Cookies Spa and Salon
Where “fun, beauty and delicious meet”, pamper the rugrats with cookie flavored soaks, scrubs, souffles, and even haircuts! With family package deals, and “cool dude treatments” for the reluctant boys, there’s a little something for everyone! Complete with a cookie bar, and a video game lounge, Milk & Cookies Spa and Salon is a must try.

Holiday Express: Toys and Trains from the Jerni Collection
The New York Historical Society has once more become transformed into an immersive, magical wonderland. The Holiday Express features Handmade Toys from as early as 1850 selected from the highly esteemed Jerni Collection. Children will get to crawl through the space leading to a pop-up bubble immersing them in scenes of a time long gone. Pick out a Holiday Express “I Spy” game and have the whole family see who can spot the most! Runs now through February 26th.