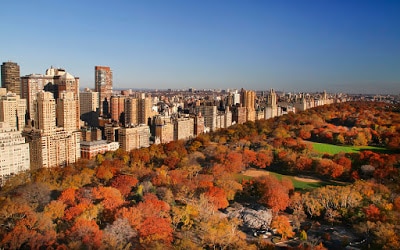 Autumn is a glorious time to visit New York City. Check out our list of must see events this season.

Open House New York
Open House New York 2016 is an annual weekend-long event during which historic buildings, architectural masterpieces, sundry landmarks and the best New York attractions welcome the public for great walking tours and nosing around. As one of the best NYC events in October, it’s the perfect opportunity to explore normally off-limits parts of New York and have a good snoop. October 15 and 16 2016

New York City Wine and Food Festival
A collaboration between the Food Network, the Cooking Channel and Food & Wine magazine, the NYC Wine and Food Festival is a four-day fest featuring individual tastings, dinners and a backyard barbecue on Pier 92 with big-name chefs like Bobby Flay and Michael Symon. October 13 to 16, 2016.

NYC Marathon
More than 40,000 marathoners will run through all five boroughs over a 26.2-mile course. Stake out a lively spot—we recommend along Fourth Avenue in Park Slope, Brooklyn; First Avenue between 60th and 96th Streets in Manhattan; or Central Park South near the finish line—to cheer on the passing throng.

Okay, so Halloween isn’t technically a holiday (although we all wish it was), but that doesn’t mean you should skip it. NYC has a staggering variety of events including not one but two parades: The Village Halloween Parade and Tompkins Square Park Halloween Dog Parade. Other fun events include Scarecrows at the New York Botanical Garden and a spooky candlelight tour of Merchant’s House Museum. Various dates

Veterans Day
Celebrate Veterans Day with America’s Parade is to honor the service of our veterans and to salute our currently serving military. This year’s Parade will commemorate the 15th Anniversary of 9/11. The parade goes north on Fifth Avenue, from 26th to 52nd Street.